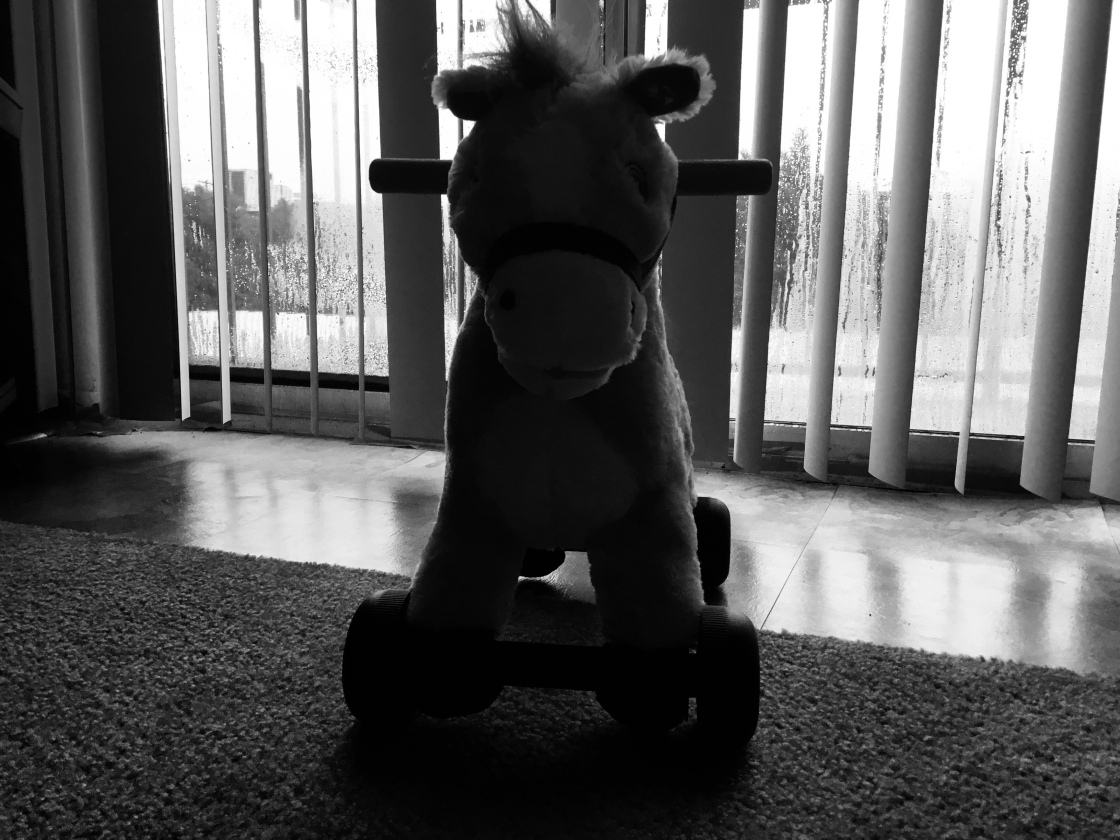 [The following is a transcript of the conversation between me and Andrew’s horse, Tinahorse. The horse, a ride-on toy, was a gift from his great grandparents. The name comes from Tina Belcher on Bob’s Burgers, which is a show Andrew has seen clips of. The conversation took place in the living room this past Thursday night, and concerns me trying to scrub a long set-in coffee stain off of a rug.]

I’m kneeling on the floor with a clear spray bottle filled with vinegar and a bottle of Dawn. A roll of cheap paper towels sits there, and I’m applying vinegar and Dawn to a coffee stain the size of my fist. It’s been there for what feels like years.

The light is too low with just the one lamp, and I can barely see-I’m having to shine a tiny flashlight on the rug while scrubbing with the other hand. It’s a slow process and it doesn’t seem to be working.

This is stupid. Why am I doing this again? It isn’t going to work.

Tinahorse: Spray some more vinegar, that should do it.

I spray vinegar onto the spot, add a drop of dish soap, and resume scrubbing.

Tinahorse: Maybe scrub with a rag or something?

Me: We don’t have any clean. I’m way behind on laundry since Andrew got sick again.

Tinahorse: Yeah, I noticed he was fussier than usual lately. Glad he’s doing better though—lots of fun today, right? Lots of puzzles and block towers and drawing circles on stuff and that one hilarious moment when he spilled your tea on the chair? Chuckles good-humoredly. Hehehe…he’s a good boy. I like him.

Tinahorse: wooooaaaaaahhhh, no need to up the ante. Clearly your feelings are stronger than mine…you’re his mother and I’m a toy horse with a girl’s name.

Me: Sorry. This is harder than I thought it would be.

Me: That. And getting this stain out.

Tinahorse: Well, what cleaning method are you using?

Me: The internet says—

Tinahorse: What specific site? Who wrote it? Are they reputable? Was it just a bot? How do you know it wasn’t just a bot or a vehicle for propaganda?

Me: I don’t know! I googled “how to clean set -in coffee stains”, and the first site that popped up said to use vinegar and water with dish soap, and scrub it a bunch of times.

Me: I’m not sure I can do this. It looks awful. It’s been here for ages—

Tinahorse: Then it probably won’t come out instantly, that’s true.

Me: I just can’t stand looking at it anymore. My List says I want to get stains out of the rug, so I have to do it. Even though I can’t remember why I put that on the List. I was sure I’d never get them out…

Tinahorse: Maybe because you figured that it was a lost cause so it didn’t matter whether or not you tried? Maybe you intended to make it into a funny joke thing—you could say, ‘well, I tried. But heck, they’re really set in, aren’t they? Never gonna happen, adulthood blah blah blah.’

Tinahorse: Look, I’ve been sitting here watching you guys since Christmas, and let me tell you…the stains in the rug aren’t the most important thing in the world. But you definitely could stand to work harder at housecleaning.

Me: What, you don’t like all the toys crammed next to you?

Tinahorse: No, they’re fine—Pup Pup and I have had some good talks about politics. I mean, you spend a lot of time watching Netflix. If maybe half of that time was spent on long-term housecleaning projects…you know, like getting stains out of the rug—

Me: Are you saying I’m lazy?

Tinahorse: Maybe. If it’s true it isn’t gonna kill you to hear it.

Me: Are you saying I give up too easily?

Tinahorse: Oh, totally. I mean, come on—you gave up spending excess money for Lent, but how long did that last? I see a lot of ThredUP boxes in the kitchen—they weren’t ALL ordered after Easter. And why is it you never published a book? Or learned to play the guitar?

Tinahorse: What do you mean you can’t? Did you ever send a book to a publisher?

Me: Yeah, once—I got a photocopied letter that said, “Dear writer.”

Tinahorse: The Random House publishing contest? You knew that was a one in a zillion shot! I mean REALLY tried. Like…tried to get an agent, or self-published something, or—

Me: Because…I don’t know! I didn’t have anything written that I was willing to stand by!

Tinahorse: So you gave up.

Me: No, I’m just…waiting for another opportunity.

Tinahorse: That is LITERALLY the song “Wait for It” from the musical Hamilton. You’ll have to do better than that. Lin Manuel-Miranda isn’t much older than you and he wrote an entire play. Why can’t you learn to play the guitar?

Me: Why, so I can be a middle-aged Taylor Swift?

Tinahorse: No, just to do it! Just to accomplish something! Wasn’t The List supposed to be about DOING things, even if they weren’t brilliant or earth-shattering? Isn’t DOING something better than NOT?

Tinahorse: Because you talk about everything in front of me. Also…and this may be a stretch…it’s possible that I’m just a projection of your inner dialogue.

Me: That may be true.

I look down at the stain…it’s sudsy, so I spray some more vinegar. There aren’t any clean rags, so I scrub it with a sock. I want to give up because it doesn’t look like it’s working…but maybe it is, so I continue. Scrubbing resumes.